The King of Nowhere 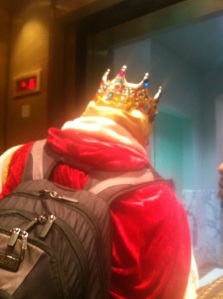 The Universe truly has a knack kicking us in the gut when we need a reminder of something. At least I think so.

I walked to Harold Washington Public Library on State Street on Sunday to return some books, and as I rounded the corner of State and Jackson, an old gothy favorite queued into my Ipod – Diary of Dream’s King of Nowhere.

I have many emotions and happy memories associated with that song, and I hadn’t heard it in a while, so I definitely had a smile on my face as I entered into the street entrance of the library and caught the elevator up to the 3rd floor, the main entrance to the Library itself. Just as the doors were closing, a homeless man caught the elevator along with me. I’ve seen him before on my many jaunts to this building, and we made eye contact and smiled at each other as he entered. When he turned to face the correct exit side of the elevator, it dawned on me that on this specific day, he was wearing a red cape and a crown.

A King of Nowhere, the song in my ears personified.

What are the odds that this should happen, that the moments meld into a synchronicity of perfect harmony in such a tangible way?

Here is a man, who carries his earthly belongings and the rolled up floor mat that protects him from the sidewalks he probably sleeps on, wearing a kingly cape and crown, coming to seek shelter from the bitter-slide of a Chicago Autumn day within the warmth of a public library…a castle of sorts, the stoic subjects lined neatly along isles of learning and history, silently waiting for the King to speak or choose them.

And that’s when it got even more profound. As we were getting off the elevator, he went in one direction and I in another, but a few minutes later we passed each other again in the poetry section on the 7th floor as I was looking for something I thought Sasha and Bella might appreciate reading along with me, something with star imagery in it, since they are both into Astronomy lately.

He walks past the isle, stops, backs up and motions to my earphones, so I pull them away from my ears. His voice was raspy and deep when he spoke.

“My crown is called content, a crown that seldom kings enjoy.”

I smiled and nodded, understanding in that Shakespearean-worded moment that probably many have judged him for his garb, his choices, his situation. And then he returned my smile and I really felt that he understood what I’d been thinking, that I appreciated his intellect and use of the quote.

How many people walk past him lying on the sidewalk, huddled beneath his crown and cape, and imagine that he’s insane, irresponsible, living in cold places and shadows? If you passed this man on the street, would you judge him? Living in the city, and seeing many of the homeless become verbally mean when you refuse to give them $ has caused me to become desensitized to their plight, I’ll admit. I often see the same homeless folks every day, in their same abandoned doorways along the concrete jungled-corridors of cold steel and passerbys, huddled with empty cups asking for change. I’ve seen enough scary behavior from certain homeless people to understand that they probably ARE insane, and my experience with “King Henry,” as I’ve come to call him because he’s clearly knowledgeable of Shakespeare’s Henry the Sixth, might not be any different in reality, but to me, somehow…he was different. I don’t care if King Henry is batshit crazy. He was lucid enough to frame his contentment and his observance of humanity around him in a way that took my breath away.

And truly, who am I to judge? He’s wearing his crown and cape, and I’ve got my knee high Doc Martens on, draped in a sea of black. We all, every single one of us, have our uniform of comfort, the experiences and ramifications of our life’s path, and the outer shell we carry, along with our inner being.

Clarity, it seems, can come from the dark shallows of our sub-consciousness, nudged on a bit by the judgy voice inside that tells us to conform to the shallower-breathing world of what it means to be a human deserving of attention or consideration. I am also to blame for this type of civil butchery, despite what I think of my open-mindedness. Conforming becomes part of the game if you want to be considered a “successful” member of society. Pay bills. Have $ for food and shelter. On and on and on.

But I wonder if I’ve grown too selective in the truths I see around me. I say this because I’ve realized that “Henry” may be a King of Nowhere, but is he really? He’s got his mat, his backpack, his shoes, his clothing…and it also appears that he has his dignity in the choices he’s made for himself, his contentment looming in the underbelly of Wacker Drive, or wherever he’s staying warm tonight.

As I look outside on this very cold night, I wonder where he’s staying warm now, or if he’s warm at all. And I wonder if he realizes just how much he’s made me reconsider my notions of the homeless I’ve allowed to blend into the urban scenery around me. The next time I walk down the street, I’ll no longer be thinking of them as Kings of Nowhere. It’s an interesting thing to consider that we are all Kings of somewhere, I think. Work. Family. Life Choices. The Paths we choose along the way. Our destiny…it can be said that we are something to someone, even if that someone is only ourself.

King Henry may wear his crown with dignity and pride, at least, because he seems to be self aware enough to know where he’s content. How many of us can actually say that? It’s something to think about, and something I’ll certainly consider when I walk down the street and see these huddled Kings in their make-shift thrones. If you happen to be walking through the Chicago Loop on your way to work, or on your lunch break, or the next time you come into the city, you may see King Henry. Or if you live in another part of the world where you witness homeless folks, consider this – they may want nothing from you at all. They may just want to quote Shakespeare, make you smile, and be on their way.

I’ll try not to judge them as harshly, discredit their existence, or assume the worst, that’s for sure. I can thank the Shakespeare-quoting King Henry for that.

And may he be warm, fed, and at peace in his kingdom tonight.

2 thoughts on “The King of Nowhere”